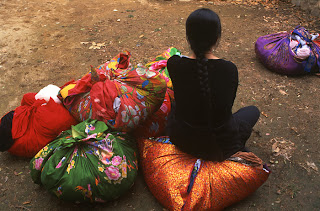 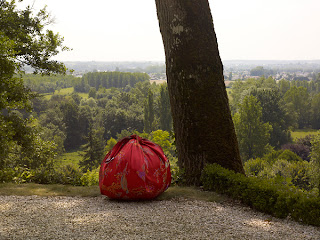 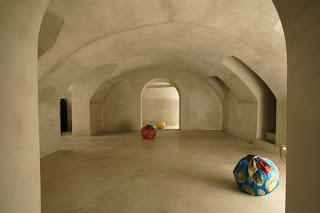 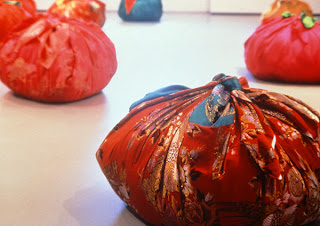 Bottari
(various installation views)
A tied bundle, something 'saved' in both the objective and metaphorical sense, arouses the same simultaneous attraction and curiosity as a body lying on the ground. To grasp the knot that holds the enveloping cloth together would reveal the enigma of what was concealed within, the story of the bundle and its origin. It is likely the story of a passage, a story of departure, travel, and arrival. Not least, the bundle, whether reference or literary motif, is an archetype deeply anchored in the consciousness of nearly everyone. When the hero of a novel resolutely girds himself, 'ties his bundle', it marks a dramatic turning point in the course of the story. The form of this putatively simple baggage, reversible at any moment, stands for an open process, a complex anticipation of what is to come. It can be a condensate of life, fully functional for some other life-space, or life-time.
Kim undertakes dealing with cloth, needle, and thread in an ordinary way, but raises it to the level of a concept. Thus, sewing along with her mother was not only an initiatory experience that showed the artist, who studied painting at the arts academy in Seoul, a way of going beyond the two-dimensional canvas to object and space. An idea, far-reaching both for herself and for the viewers of her work, manifests itself in her self-conceived role as 'A Needle Woman' — that of sewing as an interaction in space, sewing as a social behavior that endlessly constructs new and more or less unstable living-spaces
Posted by Joanna at 15:47