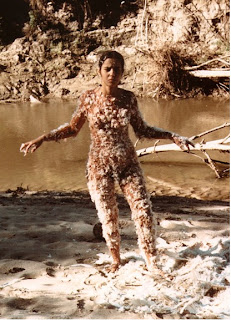 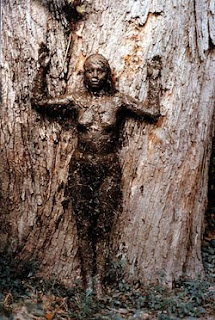 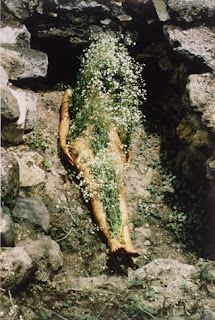 Ana Mendieta (18 November 1948 – 8 September 1985) was a Cuban-American artist famous for her performance art and “earth-body” sculptural, photographic, and video work.
Mendieta’s early approaches to art could be considered revolutionary, even in their roughest forms. She was especially intrigued by challenging the established materials of art – canvas, paint, paper, etc – and instead explored a great range of unused and disregarded materials, such as the human body. The human body had been generally regarded as one of the most important components of artistic works, as a subject. It was Ana who decided to experiment with the human body as a tool for creative expression, where it was not only the objective of the work but also the means of execution itself. The first record of her conscious work as a means of expression is 1973. An incident of rape and murder had occurred on the Iowa campus, and Ana wanted to protest against the campus administration’s approach to the issue (the usual hush-hush approach and, in general, bad PR).
Ana Mendieta’s early artistic experiments (roughly 1972 – 78) involved a lot of cosmetic refinement and elaboration. Challenging both physical expectations as well as throwing subtle hints at gender roles, she would utilise makeup, glass, and sometimes even shampoo to modify her upper body into different and controversial configurations, assuming different personalities and stances throughout her photographed works. Her video experiments are much more theatrical in their span; they feature a symbolic plot and timeline – the life of a particular piece she had conceived.
At the start of 1975 her body-centred art found a new height: the production of the Silueta series, in which she imprints of her own body merged in the landscape. Some critics have drawn parallels between her Siluetas and the early work of feminist artists that sought to re-establish the link between the female form and the Mother Earth figure. Mendieta, however, had a different concept behind her work. She had apparently been fascinated by the concept of ‘Mythical Geology’ as well as the Rupestrian art and it was this that she sought to achieve in her works.
Posted by Joanna at 13:39