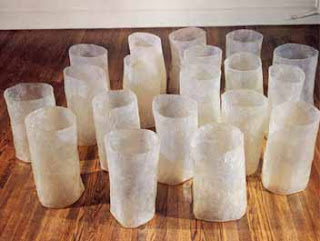 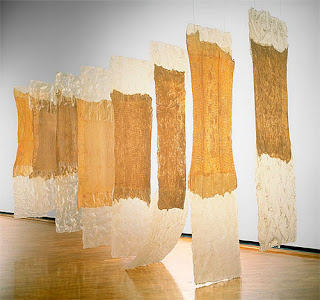 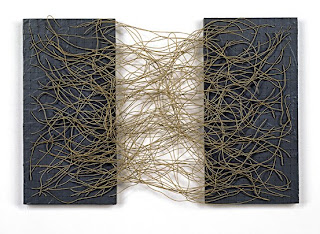 "The artist who did the most to humanize Minimalism without sentimentalizing it was Eva Hesse. Dying of brain cancer at thirty-four, an age at which most artist's careers are barely under way, she left a truncated body of work but one of remarkable power: an instrument of feeling that spoke of an inner life, sometimes fraught with anxiety...
"Spurred by the examples of Joseph Beuys, Claes Oldenburg, and Jean Dubuffet, Hesse grew more and more interested in what usually didn't pertain to sculpture. Backing away from its 'male' rigidity, which included the high-style rhetoric of Minimalism, she allowed her fascination with the 'female' and the inward, including what was grotesque and pathetic, to enlarge. The phallic mockery in Hesse's work can be comically obscene: black salamis wound with string, slumping cylinders of fiberglass. Even when it looks entirely abstract, her work refers to bodily functions. Hang Up, 1965-66, looks at first like a query about illusion and reality - the big rectangular frame hanging on the wall with no picture in it, but with a loop of steel tube spilling onto the gallery floor and connecting the frame's top left to its bottom right corner. But again, there's a fleshy metaphor. Both tube and frame are wrapped in cloth, like bandaged parts of a patient, and the tube might be circulating some kind of fluid. Blood? Lymph? Fantasies? Even in absence, the body is somehow there, as an ironically suffering presence; the title phrase, 'Hang-Up,' means both what you do to pictures and (in 'sixties slang) a mental block, a neurosis.
"However, Hesse wasn't an art martyr and her images are very much more than mere enactments of illness or oppression. They reflect on identity, sometimes with wry wit or an angry fatalism; but to see Hesse as a precursor of 'victim art' does her a disservice. She never wanted to see her work smugly categorized as 'women's art.' Quite the contrary; Hesse wanted it to join the general discourse of modern images, uncramped by niches of gender or race. 'The best way to beat discrimination in art is by art,' she brusquely replied to a list of questions a journalist sent her. 'Excellence has no sex.' Very old-fashioned of her, by today's standards of cultural complaint."
From "American Visions", by Robert Hughes
Posted by Joanna at 02:44