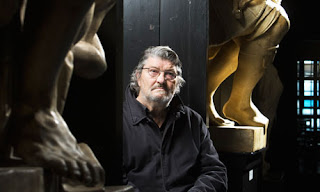 This week, the work of all four shortlisted artists goes on show at the Baltic, Gateshead – and two are Glaswegian: Martin Boyce, whose sculptures do fearful things with modernist interior design; and Karla Black, who uses lipstick, pastel-coloured candles, eyeshadow and sugar paper as her materials. Artists based or born in the city who have been shortlisted in the recent past include Jim Lambie, Christine Borland, Cathy Wilkes, Lucy Skaer and Nathan Coley. There have been two further winners in Douglas Gordon and Simon Starling.

If the Turner prize provides a rough-and-ready compass bearing for visual art in Britain, the needle has for some time been twitching towards this grandiose, grandiloquent, sometimes rough-and-ready city. Why? A clue can be found in the first issue, from September 1991, of the contemporary art magazine Frieze. It contains an interview with three artists in their early 20s. They have just graduated from the Glasgow School of Art. They are articulate, cocky and funny. They seem to know, with an intense certainty, that they are artists, not just art-school graduates. One writes off, with breathtaking chutzpah, a then-prominent school of Scottish painters as "a tiny, unimportant part of the international art world". Another, while admitting such a formulation is crass, says their own work has "more to do with hip-hop and the Face than Constable". These young guns are Douglas Gordon, Nathan Coley and Martin Boyce. Five years after the interview, Gordon – now best known for film works such as 24-Hour Psycho and Zidane – won the Turner prize.

link below
http://www.guardian.co.uk/artanddesign/2011/oct/17/glasgow-turner-prize?fb=optOut
Posted by Joanna at 14:16